The Salle Pleyel, which opened in 1927, is arguably Paris’ first hall dedicated to symphonic music. It is the oeuvre of the engineer Gustave Lyon. At the time of its design, other perceptual attributes of the music listening experience such as presence, tonal balance, warmth, clarity of the perceived sound, reverberance and listener envelopment were not considered to be relevant descriptors of concert hall acoustical quality.

For various reasons, the hall has undergone a number of significant architectural changes since its opening. Most recently, these changes have been focused on improving its acoustics in order to better adapt it to the performance of symphonic music. But it was not until 1989 that an acoustic study conducted by CSTB Grenoble identified the specific acoustic deficiencies of the Salle Pleyel: an insufficient reverberation time, lack of sound envelopment, deficient tonal balance, as well as the presence of echoes in the front seating areas and the concert platform coming from the back wall.

The mission of Artec Consultants as acousticians and theatre planners, was to find proper in depth solutions for trying to overcome the main deficiencies of the hall. Therefore, a thorough study on the acoustic and functional conditions of the concert hall revealed that the room had some serious theatre and acoustic shortcomings. In order to correct them, a certain number of actions were undertaken as follows:

Renovation of a concert hall 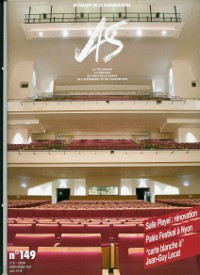